Happy Monday everyone!!  Hopefully your week is off to a successful start…

In support of the high traffic sports field discussions on this blog, we have some new evidence to share in the “yes, it is possible for grass fields to take more” category.   The SoccerPlex Stadium field experienced yet another test of durability and strength w/ the University of Maryland v. US Navy in 15 v 15 rugby Friday night.  The field, renovated last fall and grown in from Kentucky bluegrass seed (see “SoccerPlex Stadium Renovation” section of this blog) has hosted 20 soccer events since March 14 (10 youth matches, 5 pro exhibitions, 1 pro team training, & 2-6 hour long clinics) while sitting nearly dormant because of below normal/ near freezing temperatures.  We were very happy to have that weather pattern break last Monday just to allow us to get some green up and enough growth to mow at least a few times at 3/4″.

Because SoccerPlex itself, or any of our field management staff,  had never hosted rugby on grass before, we adopted the 2 matches: 1 on Field 12; 1 of stadium; as a Case Study for field wear.  A common theme amongst those with the old belief that seed can not grow into a strong field as quickly as SoccerPlex Stadium has, and still host American football or rugby.  But our hypothesis has been the opposite… that the field would take rugby (and American football) BETTER because it was seeded.  So the jury was out, and the nervousness ensued….

PREPARATION
In preparation for the matches, 2 weeks prior we invited the Maryland squad out to do a rugby simulation.  With never hosting or seeing 15v15 rugby match live, we had no idea how to prepare for it.  For lacrosse, creases and arches are sand dress to protect the plant crowns from damage.  For multiple soccer matches, the field is deep tined  to soften slightly and watered a bit less to “firm up” the surface.  For rugby, we had no idea!  So the “test” allowed us to witness the sport, see how the field might respond, and create an approach for managing the traffic.  Also with the test, we used a shear strength tool to get a baseline for the lbs/in that is would take to rip the turf and documented root growth and condition.  A picture of the root mass:

Overall, the test went smooth and we decided the field, with a good watering the night before, was prepared to take the shearing and digging from the rugby “scrum” without anything special being done to it.  But because of the cold weather and a lack of active growth, we did decide to made a soil nutrient application to feed the cold soil environment along w/ some “liquid oxygen” to stimulate root activity; both in case we needed the plant to recover from damage.

MATCHDAY
Game day arrived with the field in fantastic condition, even with hosting 19 prior events this spring already.  To start, 1/2″ of rain was received from a thunderstorm at about 5am.  The heavy rain provided the perfect amount of moisture and allowed us to save water.  Layout and painting of the field took place the day before, so mowing, goal sleeve dig out, and post set up was the game day activity required.

The 15v15 matches were 90 minutes long w/ a running clock for 2- 45 minute halves.  Warm-ups lasted about 45 mins as well.  Ultimately the fields were in play for about 2.25 hours for each. Field 12 is an overseeded Patriot bermudagrass field on native soil, so outside of being too wet there were no concerns with play because the field is nearly indestructible.  The concerns, if any, were with the stability and durability of the sand surface w/ the still young Kentucky bluegrass of the stadium field when subjected to the digging, pushing, turning, and tackling that takes place in a rugby match.

In the end, those concerns were put to rest completely.  Following warm-ups, a thunderstorm passed directly to our north causing a lightning delay for about 45 mins.  When the teams took the field again, we walked the field for any divots or damage.  That turned into a peaceful stroll across a field that showed zero wear or damage to begin the evening.  But again, it was just warm-ups.  The worry of the speed, the hitting, and the digging of the “scrum” was still there.  Here are some of the photos and highlights: 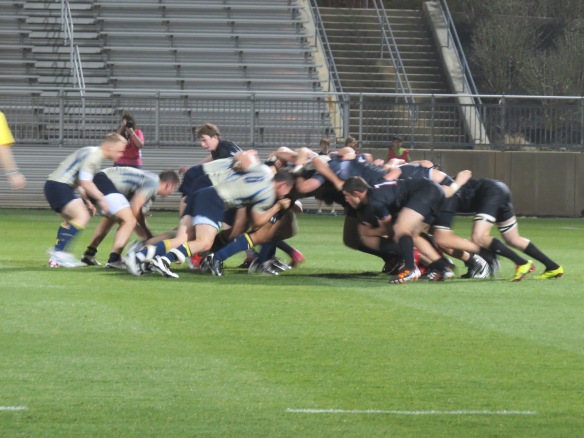 POST MATCH
The durability that the field displayed during warm-ups continued throughout the 90 min match.  A post game inspection of the field found little to no damage to the surface.  1 or 2 small tears were found, but nothing over 3/4″ deep.  Ultimately, the field continued to take the traffic in stride, just as it has since opening on Oct. 6 of last year.  Some of the evidence:

The Maryland Club Rugby Facebook Page also has some fantastic pics as well:

CONCLUSIONS
Following the match and data collecting, we are now creating conclusions of how and why the newly renovated field sustains traffic with such strength and durability.  Some of our thoughts currently are:

1)  No sod/ organic layer:  Because the cleats of the players are digging into the firm sand, the overall stability of the surface is better.  “Divots” that come out of fields are generally at the sod/ sand interface because the roots are not leaving the sod into the sand.  This field does not have that, so divots are impossible.

2)  Superior root density and shear strength:  The new varieties of Kentucky bluegrass from seed that were used to grow in the field  appear to be far superior in creating root density and shear strength.  That is something the damage sustained from play when the seed was 35 days old illustrated immediately as the grass layer just “rolled up” and was stepped back down.  These varieties, even at just 7 months old (only 3 active growing months), are on a different level.

3)  Stability fibers in the sand:  Historically, stability fibers (fibre sand) has had a bad reputation in the USA because of numerous failures.  As a student in college, I was a witness to one of those failures.  But it now is very evident that the fibers themselves were not what was failing, it was us as US managers laying thick cut sod on reinforced sand then expecting the fibers to do their job w/ out aggressively aerating.  Stability fibers provide firmness to the sand and give the seedling plant roots something to wrap around and secure themselves tightly into the sand.  Because of that, “shearing” is impossible.  Leaf blades can be torn off, but the crown and root of the plant remains.

We are continuing to document the field for another week following the rugby match as the field is prepared for the home open for the Washington Spirit of the National Women’s Soccer League this coming weekend.  Monday morning the field was deep tined at 8″ to loosen the reinforced sand and then was aerated with solid tines on 1″x 2″ centers at 3″ deep to soften the surface for soccer.  Ultimately no matter what conclusions we draw in the end…  once the rugby lines grow out (or get greened out), it would seem that the combination of seeding with superior Kentucky bluegrass varieties into reinforced sand has created a surface that the turn around from rugby to soccer is possible over and over again.

What are your thoughts and experiences with the traffic and damage sustained from rugby?  What a fantastic sport to watch… I can see why its so popular across the world now.  It absolutely was a treat to be able to host the event!!